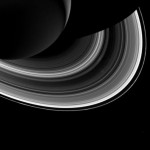 One of Saturn’s iconic rings looks much different today than it did just a few decades ago, and scientists aren’t sure why. NASA’s twin Voyager spacecraft spotted many bright clumps in Saturn’s F ring when they flew by the gas giant in the early 1980s. But observations made by the space agency’s Cassini probe from 2004 to 2010 reveal relatively ... END_OF_DOCUMENT_TOKEN_TO_BE_REPLACED