Widespread publicity was generated by the Barney and Betty Hill abduction case of 1961 (again not widely known until several years afterwards), culminating in a made for television film broadcast in 1975 (starring James Earl Jones and Estelle Parsons) dramatizing the events. The Hill incident was probably the prototypical abduction case, and was the first in which the beings explicitly identified an extraterrestrial origin (the star Zeta Reticuli was later suspected as their point of origin.) 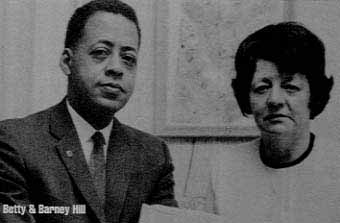 As the story goes … On September 19, 1961 on US Route 3 near the village of Lancaster. Barney and Betty Hill of Portsmouth, New Hampshire were traveling home after a vacation in Canada when they saw a moving light in the sky. Every now and then they would stop and check on the unusual light that seemed to “fly” an erratic course. They drove on towards the White Mountains, noting that the object was now much larger and following a parallel course to their car.

Approaching Indian Head, the light appeared directly ahead of them Barney Hill left the engine running and got out of the car to observe the strange object with a pair of binoculars. He observed what he described as “5 to 11 figures moving behind a double row of windows”.

Betty Hill, who was observing her husband from her side of the car, heard her husband repeating, “I don’t believe it! I don’t believe it! This is ridiculous!” She, however, was unable to see the figures or the descent of the UFO. The object was now approximately 70-feet overhead and about 100-feet distant when Barney Hill ran back to the car exclaiming, “They are going to capture us!”. He got back in the car and drove away at a ‘break-neck’ speed.

During this time Betty Hill was still unable to see the object but her husband thought that it was directly over the car. They heard a loud beeping noise, similar to the sound of a “tuning fork”, and then they felt very drowsy. When they awoke, they found themselves driving near Ashland, two hours later. Ashland is 35- miles south of Indian Head, a twenty or thirty minute drive. They continued their drive home, feeling somewhat uneasy and confused about their missing two hours.

The next day they reported their experience to officials at Pease Air Force Base. A few days later, an investigator from the National Investigations Committee on Aerial Phenomena (NICAP) documented both of their stories.

Their experience was far from over. Within ten days of the incident, Betty Hill began having recurring nightmares in which 8 to 11 “men” would stand in the middle of the road and stop the Hills’ car. They would then be led into a disk-shaped craft and examined.

Samples of hair and skin would be taken. Continued anxiety led both of the Hills to seek the help of Dr. Benjamin Simon, a Boston psychiatrist who specialized in treating personality disorders and amnesia through hypnotherapy, which was becoming popular.

Their treatment lasted for six months. With time regression hypnosis, many details of their encounter were revealed. The detail in which both Hills described their abductors and the subsequent examination matched closely to each other as well as to Betty Hill’s nightmares. Betty Hill, under posthypnotic suggestion, was able to draw a “star map” detailing the origin of the alien abductors. The amazing configuration of Betty’s map was not to be realized for some years. 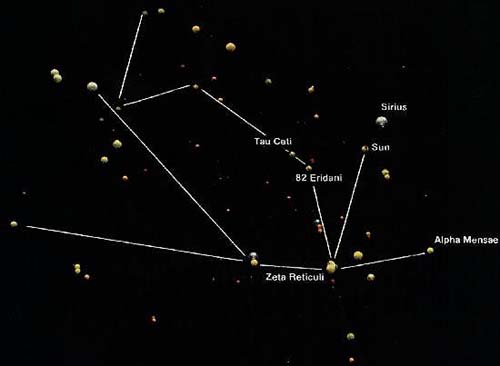 An astronomical investigation, based on information that was not available in 1961, produced a controversial match between Betty’s “star map” and a cluster of previously unknown stars near two stars called Zeta Reticuli.

Dr. Simon later stated that his professional opinion of the Hill’s abduction account was that it was mere fantasy. As a prominent Boston psychiatrist, it would be particularly damaging to his reputation to ‘believe’ that the Hill’s story was anything but a product of their collective imaginations. His reasoning for his conclusion was that “people do not necessarily tell the factual truth while they are under hypnosis – all they tell is what they believe to be the truth.