A planet may be causing the star it orbits to act much older than it actually is, according to new data from NASA’s Chandra X-ray Observatory. This discovery shows how a massive planet can affect the behavior of its parent star.

The star, WASP-18, and its planet, WASP-18b, are located about 330 light-years from Earth. WASP-18b has a mass about 10 times that of Jupiter and completes one orbit around its star in less than 23 hours, placing WASP-18b in the “hot Jupiter” category of exoplanets, or planets outside our solar system.

WASP-18b is the first known example of an orbiting planet that has apparently caused its star, which is roughly the mass of our sun, to display traits of an older star. 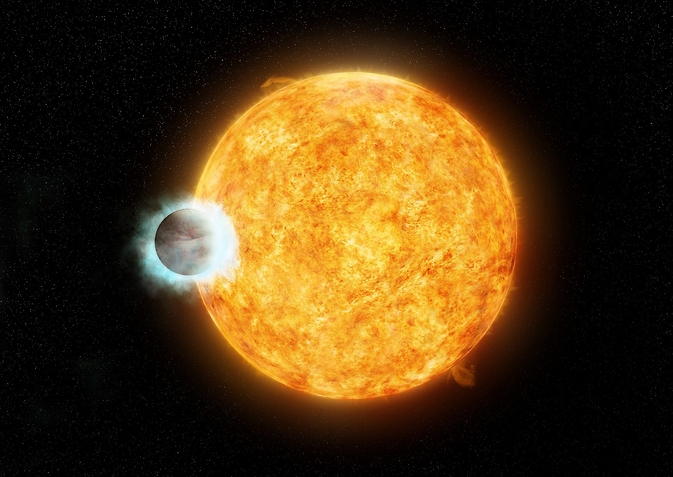 “WASP-18b is an extreme exoplanet,” said Ignazio Pillitteri of the Istituto Nazionale di Astrofisica (INAF)-Osservatorio Astronomico di Palermo in Italy, who led the study. “It is one of the most massive hot Jupiters known and one of the closest to its host star, and these characteristics lead to unexpected behavior. This planet is causing its host star to act old before its time.”

Pillitteri’s team determined WASP-18 is between 500 million and 2 billion years old, based on theoretical models and other data. While this may sound old, it is considered young by astronomical standards. By comparison, our sun is about 5 billion years old and thought to be about halfway through its lifetime.

Younger stars tend to be more active, exhibiting stronger magnetic fields, larger flares, and more intense X-ray emission than their older counterparts. Magnetic activity, flaring, and X-ray emission are linked to the star’s rotation, which generally declines with age. However, when astronomers took a long look with Chandra at WASP-18 they didn’t detect any X-rays. Using established relations between the magnetic activity and X-ray emission of stars, as well as its actual age, researchers determined WASP-18 is about 100 times less active than it should be.

“We think the planet is aging the star by wreaking havoc on its innards,” said co-author Scott Wolk of the Harvard-Smithsonian Center for Astrophysics in Cambridge, Massachusetts.

The researchers argue that tidal forces created by the gravitational pull of the massive planet – similar to those the moon has on Earth’s tides, but on a much larger scale – may have disrupted the magnetic field of the star.

The strength of the magnetic field depends on the amount of convection in the star, or how intensely hot gas stirs the interior of the star.

“The planet’s gravity may cause motions of gas in the interior of the star that weaken the convection,” said co-author Salvatore Sciortino also of INAF-Osservatorio Astronomico di Palermo in Italy. “This has a domino effect that results in the magnetic field becoming weaker and the star to age prematurely.”

WASP-18 is particularly susceptible to this effect because its convection zone is narrower than most stars. This makes it more vulnerable to the impact of tidal forces that tug at it.

The effect of tidal forces from the planet may also explain an unusually high amount of lithium found in earlier optical studies of WASP-18. Lithium is usually abundant in younger stars, but over time convection carries lithium to the hot inner regions of a star, where it is destroyed by nuclear reactions. If there is less convection, the lithium does not circulate into the interior of the star as much, allowing more lithium to survive.

These results were published in the July issue of Astronomy and Astrophysics and are available online.

An interactive image, podcast, and video on these findings are available at:

For a preprint of the study results in The Astrophysical Journal, visit: