Boeing and the Space Exploration Technologies Corporation are the winners in the competition to carry American astronauts to the International Space Station, NASA announced on Tuesday.

The awards reflect a fundamental shift in NASA’s human spaceflight program, relying on private companies rather than the traditional hands-on approach, in which the space agency designed and operated the spacecraft.

The first flights could take off as soon as 2017.

“We have credible plans for both companies to get there by that period of time,” Kathryn Lueders, the 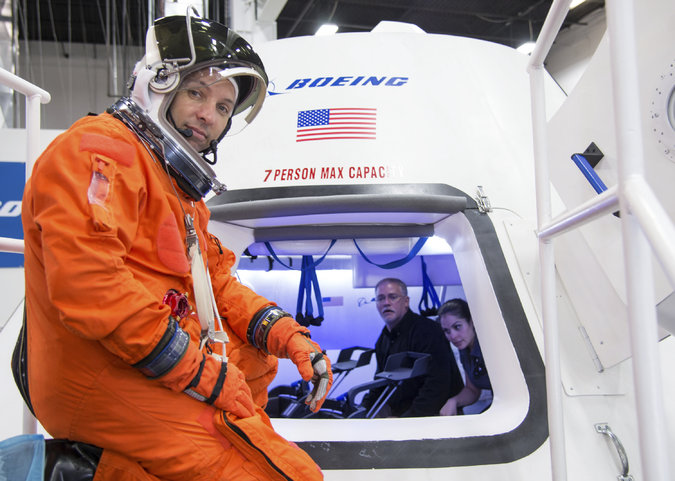 The astronaut Randy Bresnik preparing to enter the Boeing CST-100 spacecraft at a company facility in Houston.

manager for NASA’s commercial crew program, said during a news conference on Tuesday. “We will not sacrifice crew safety for that goal.”

Since the retirement of the space shuttles in 2011, NASA has had no way to send its astronauts into orbit, relying on the venerable Russian Soyuz spacecraft for transportation to and from the International Space Station at a cost of $70 million per seat.

That became a politically uncomfortable arrangement after Russia’s annexation of Crimea and support of pro-Russian separatists in Ukraine.

John Mulholland, commercial crew manager at Boeing, said NASA had called just before the news conference to tell him his company had won the competition.

Under the contracts, Boeing and SpaceX will finish development of their spacecraft. Boeing’s CST-100 capsule, configured to carry up to five people, will launch on an Atlas 5 rocket. SpaceX’s Dragon 2 capsule, a sleeker, updated version of the capsule already carrying cargo to the space station, will ride on top of the company’s Falcon 9 rocket.

The bids from the two companies covered the same tasks. Boeing’s proposal was more expensive, in part because the Atlas 5 is more expensive than the Falcon 9.

A third company, Sierra Nevada Space Systems, of Louisville, Colo., had proposed a design that resembled a mini-space shuttle that would land on aircraft runways. A statement from the company said it would review its options.

Much of the money allotted to SpaceX and Boeing in the next three years will go to meeting NASA’s certification requirements for performance and safety. As part of that process, each company will conduct a test flight to the space station with a crew that is to include at least one NASA astronaut.

Once the companies are certified, NASA has promised each at least two missions. The full contract amounts will be paid if NASA orders six missions from each company.

Mr. Mulholland said NASA had yet to discuss its plans in detail, but space agency officials in the past have said they expected two flights a year to the space station. If flights begin in 2017 and each company flies one a year, the contracts could run through 2023.

With each flight taking four astronauts, the space station crew will be able to grow to seven, from six. NASA officials said that additional crew member would allow the agency to double the amount of science conducted.

The Boeing and SpaceX capsules will also serve as lifeboats for the space station crew in case of an emergency. The commercial crew program came out of the cancellation of an earlier program started under the Bush administration to send astronauts back to the moon.

That effort relied on two rockets designed and operated by NASA. The Obama administration concluded that approach was too expensive and canceled the rockets.

Instead, the administration built on another Bush-era initiative. NASA had hired two companies, SpaceX and the Orbital Sciences Corporation of Vienna, Va., to fly cargo to the space station. Beginning in 2010, NASA began a similar competition to choose companies to carry astronauts, not just cargo.

The hope is that the commercial approach will spur a space travel industry far larger than just NASA. Boeing, for example, hopes that the fifth seat in its CST-100 capsule could carry a paying tourist to the space station. “We’ll be working with NASA to try and bring that to reality,” Mr. Mulholland said.

Both Boeing and SpaceX are working with Bigelow Aerospace, a Las Vegas company that plans to launch private space stations into orbit, to be leased to nations or companies.

“We’re going to be aggressive to cultivate the business beyond NASA,” said John Elbon, vice president and general manager for space exploration at Boeing.