So what is this Area 51 and why was its kept a secret for so long?

Literally thousands of government employees are sworn to secrecy at the base called Area 51. Why? It is known for a fact that many USA aircraft are designed and 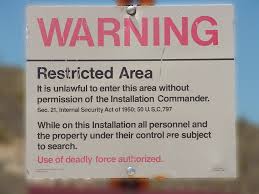 tested there, and for national security reasons, these state-of-the-art planes and weapons demand secrecy.

For years even our own government denied its existence until Soviet pictures confirmed what many knew all along. The base did exist. The facility was originally designed for the testing of U-2 spy planes, and ultimately Stealth technology would be born there. The secret site has grown to many times its original size. The USAF took over command of Area 51, and its airspace in 1970. The facility is usually referred to as Dreamland.

But is that the only reason for the veil? Many think not. Many reports have come from this clandestine site of reverse-engineering of UFOs, test flying UFOs from other worlds, and development of our own designs based on craft captured from other galaxies. The employees who work under the shroud of mystery are flown to the base in an unmarked Boeing 737 to perform their duties.

This mysterious fortress and its surrounding grounds are strictly off-limits. What secrets are kept inside this highly guarded facility? The rumors abound. Yes, there have been pictures of craft doing amazing maneuvers over these guarded skies, and pictures and video smuggled from inside. These smuggled articles show living and dead aliens, spacecraft of futuristic design, but still the government denies these claims.

During the 70’s and 80’s the workers at Area 51 were exposed to jet fuel toxins like JP7. Supposedly old computer parts were also burned in trenches. The workers were ordered to go into the trenches and mix up the material and were only allowed to wear protection up to their waist.

The Air Force has acknowledged the existence of the Nellis Range Complex near the Groom Dry Lake for many years now. There are a variety of activities, some of which are classified, throughout the complex.

The range is used for the testing of technologies and systems training for operations critical to the effectiveness of U.S. military forces and the security of the United States.

Helen Frost, whose husband Robert died in 1988 from the fumes, filed a lawsuit against the government in 1996 but the case was dismissed by the judge because the government could neither confirm nor deny the allegations, and it was also stated that the base is exempt from any environmental laws.

Some specific activities and operations conducted on the Nellis Range, both past and present, remain CLASSIFIED and cannot be discussed.

1984: Nearly 89,000 acres of land is seized to push the border of restricted land far from the base.

July 17, 1988: A soviet spy satellite takes a photo of Area 51 which is released in “Popular Science,” and other publications.