Based on what we know and heard, circle was the shape to go with when it comes to UFOs, but recently a new shape is coming into the picture in this context, and its none other than triangular.
The Flying Saucers

For many years now, UFOs have more than not been identified as “flying saucers,” or disc-shaped objects. Of course, there were other unknown flying object reports of odd-shaped vehicles of many different descriptions, but these were the exception and not the rule.

In the last 30 years or so, the triangle shape has become a topic of much discussion. Often reported as flying low and running silent, with several lights on the bottom, these strange objects have become an enigma in UFO circles. Sightings of these objects often come in waves, and they are reported as 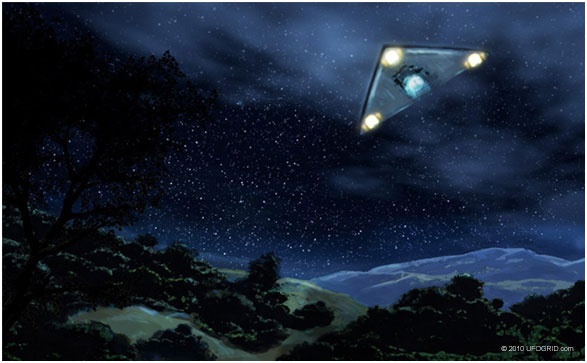 being able to go from a crawl to a high speed departure in a matter of seconds.

Many feel that the triangle UFO may be a top-secret government craft, still in the experimental stage, and more than likely designed with military implications. Some researchers feel that they are the next step in the Stealth series of craft, capable of flying low and making their exit without being detected by enemy radar. This type of craft would be indispensable for enemy surveillance, especially with weapon capabilites.

I will agree that a good portion of triangle UFO sightings may be attributed to a government manufactured craft, but this cannot account for all of them. The man on the street cannot know just how advanced governmental or military technological prowess may be, but reports of the flight characteristics of the triangles seem to surpass even our most liberal estimates of what modern technology is capable of.

Although the triangle craft seem to be a dark, mysterious entity, according to researcher and author, Clyde Lewis, triangle sightings in the United Kingdom are almost an everyday occurrence. He states in his article, “Mystery of the Black Triangles,” there have been approximately 4,000 reports of the triangles since 1990 in the UK alone.

There have also been waves of triangle sightings in Belgium, France, Holland and Germany, beginning with the most celebrated wave of all, the 1989-1990. In this particular case, in addition to triangle sightings, other anomalous events took place. As some of the triangles were picked up by military radar, jets would be scrambled to get a close look at exactly what was invading Belgian airspace. However, although the jet fighters could briefly lock in on the mysterious UFOs, when their weapons were set to fire, their electrical systems would malfunction, and soon the triangles were out of range.

A second unusual fact during the Belgian wave was the inability of eyewitnesses to capture the objects on film. There are a couple of fairly decent, distant videos of them, and finally one good photograph was taken in April, 1990 in the city of Petit Rechain.

This photograph, clearly shows a triangle-shaped object with red lights on the belly.

There were approximately 1,000 sightings of the Belgian triangle, and many of these were reported by ground observers who could clearly see the craft, and took what they felt would be a good, clear picture. However, when their film was developed, the image was blurry, and had no probative value. This fact came to the attention of August Meessen, physics professor, who was employed by the Catholic University at Louvin.

He developed a theory that the photographic failures were caused by infrared light. He proved his theory through scientific experiments. What this actually means is open to debate, but it appears from witness statements, that the farther away the triangle was from the photographer, the better chance to get a good image.

The sightings over Belgium were investigated, and there was no doubt that unknown, triangular-shaped objects moved over the country for about two years. They were caught on radar, seen by pilots, and witnessed by a general cross section of the public, including policemen.

No explanation could be given, except to say that something very unusual occurred in the Belgian skies. This is one of the best examples of the triangle UFOs, but in future articles, I will detail other special cases of these strange, low-flying craft.