Who Built the Pyramids? Humans or Aliens: An analysis

A popular theory that has been gaining moment in recent years revolves around the idea that long ago the Earth was visited by Aliens and that these advanced beings are responsible for some of the colossal building project usually attributed to ancient man. Proponents of this theory argue that ancient man simply did not have the technical know-how or the manpower to build such impressive structures as the Great Pyramids of Giza or the Nasca Lines in Peru. These proponents fail to understand the scientific principle of Extraordinary Claims require extraordinary evidence and Occam’s Razor. 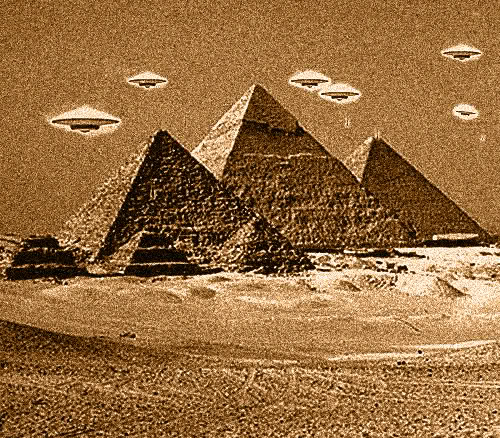 were built by ancient man. Proponents of the theory think that just because the secrets of the engineering behind the pyramids was not expressively left behind by the Egyptians that this opens the door for alien construction.

Proponents also fail to realize that the simplest explanation is usually the correct one. What is more likely? Aliens came down from the sky and helped ancient man build stone monoliths or that ancient man build them as a crypt for their Pharaohs? What would have the aliens gained by building monument out of rock? Why not teach ancient man about something more interesting like steel construction or concrete? Proponents conveniently fail to answer these questions.

The theory that aliens from another world may have assisted in building the Great Pyramid of Giza in Egypt might explain how some of the most amazing and mysterious engineering feats in human history were accomplished. Moving massive stone blocks, apparently quarried from many miles away, and assembling them into something so colossal and precise seems like an insurmountable task even today.

How did people manage it so many thousands of years ago without the use of modern construction techniques? Logically, it appears the ancient Egyptians must have known something, or someone, that we don’t.

Some say only access to advanced technology would have allowed them to create stone structures, some with blocks weighing in the neighborhood of 70 tons, with such perfect mathematical alignment.

Then again, maybe we aren’t giving them the respect they deserve. The ancient Egyptians were awfully smart, so maybe they could well have built their own darned pyramids without any help from extraterrestrials. But the fact is, of the Seven Wonders of the Ancient World, not only is the Great Pyramid of Giza the only one still standing, but it was already almost 2,000 years old when other cultures began to build their wonders.

Were the Egyptians of antiquity really that much more advanced than everyone else, way back then?

Those who subscribe to ancient astronaut theory have more reasons than the complexity of pyramid design to think that aliens may have had a hand in ancient Egypt. Is there enough evidence to conclude that visitors from another planet have been here for thousands of years, guiding and influencing the advancement of mankind?

Or, were the ancients far more advanced than we realize, and has some important information been lost through the ages?

Of course we’ll probably never know for sure, but let’s take a closer look anyway!

How Were the Egyptian Pyramids Built?

Assuming the pyramids were built by human hands, how would this have been accomplished? Most of the blocks that comprise the Great Pyramid of Khufu are solid limestone and granite. The limestone blocks were likely taken from local sources, but the granite blocks, some over 70 tons, were hauled from a site over 500 miles away.

How the heck did a civilization that didn’t use the wheel move these things to the site, and when they got them there how were they put into place? This is subject that has been pondered and debated through the ages, but researchers now have ideas of how it could have happened.

Most experts agree that ramps of some kind were used to get the blocks into position, but the configuration of those ramps remains unknown. Some think several long ramps from the ground to the work area were constructed and modified throughout building.

One ancient account suggests the blocks were lifted into place using some kind of fulcrum mechanism that allowed a team of workers to move them with relative ease.

As for dragging the blocks along the ground, some speculate that either round timbers or a kind of lubricated slipway may have been used to make them easier to move. The Nile River was almost certainly used to transport the blocks great distances on barges.

So, looking at the methods above, any combination of those techniques, as well as many still to be thought up, could account for how humans may have built the pyramids. It may not have been easy, and it may not have been fun, but with a whole lot of hard work and a little gentle encouragement from the Pharaoh certainly it was possible.

So what makes us think aliens were involved?

Surely if aliens had been here they would have left evidence of their presence. The proof may be in the pyramids themselves. It’s easy to think of the pyramids only as giant block buildings, but in reality they are much more than that. Even more amazing than their construction is the hidden details of their structure.

For one thing the sheer magnitude of the project alone hints that humans would have struggled to complete it. It’s estimated that it took 20,000 workers about 20 years to build the Great Pyramid of Khufu.

At first that might sound about right, until you realize that there are about 2.5 million blocks in the pyramid, which means, if crews worked 10 hours per day, a block had to be put in place every couple of minutes. That’s not considering moving ramps around and all the other stuff that must have gone into building.

Looking at it this way, it seems like a little help from extraterrestrial technology would have been welcome.

The Great Pyramid of Khufu was built to very precise alignments. It is said the pyramid is aligned to true north to an accuracy of 3/60th of a degree. And, at the time it was built, it was likely aligned exactly to true north, as true north shifts over time.