Visitors from another planet

Have you ever asked this question… What are UFOs and Where Do Aliens Really Come From?

Here is an interesting analysis on this subject.

UFO Sightings and the Mystery behind Alien Visitation

Accounts of UFOs and alien visitors go back thousands of years, but do we really have any idea what they are and where they come from?

What do they want? Why are they here? Are they really here at all?

A wise FBI agent once said, “I want to believe.” That’s probably how most of us feel. We want to believe in UFOs because it gives us hope that life is out there, somewhere, that’s sort of like us. If some other culture, somewhere else in the cosmos, is capable of building spacecraft that can travel the distance between their world and ours, it gives us hope that we too may one day explore the stars. More than anything, maybe believing that aliens are visiting our world makes us feel less alone when we look up into the stars at night, that maybe we are all part 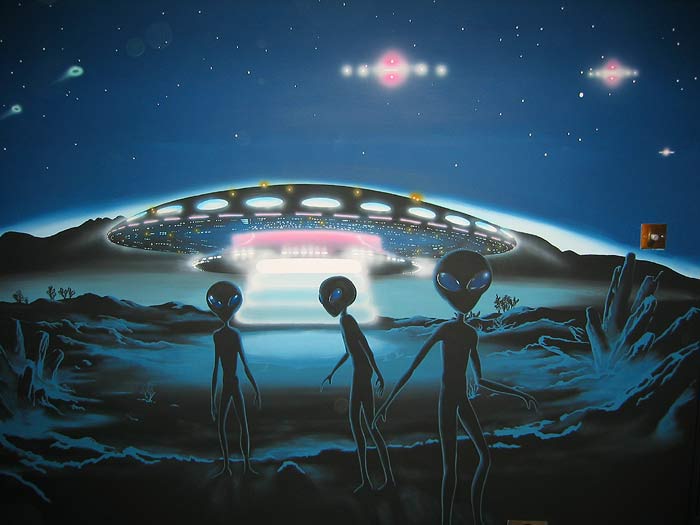 of some cosmic community.

But what if UFOs and aliens aren’t really what we think they are? What if they aren’t visitors from another planet at all? Those who report interactions with them don’t always have the most pleasant story to tell. Why would another culture travel countless light years only to abduct our citizens, abuse our livestock and frighten out governments, all while remaining as secretive as possible?

In this article you’ll read about five disturbing theories on what UFOs may really be, and where they could come from. Those cute little grey aliens may have more on their agendas that we ever realized.

Aliens are the First Wave of an Invasion Force

In this scenario we’ll assume UFOs originate on some other planet, probably quite a long ways away from Earth. Looking at how the our Milky Way Galaxy is ordered, we have to think even a culture capable of traveling close to light speed would take a long, long time to get from their planet to ours. Einstein says they can’t go faster than light, so unless they know something about physics that we don’t (which is possible) they are governed by this galactic speed limit.

In other words, the aliens are in no hurry. Even if they have been visiting here for thousands of years, that still may be only a small fraction of the time their culture has been traveling in space. Maybe they’re sending ships to Earth to examine our planet and the creatures that live here, and maybe this is part of a project that could last hundreds or thousands of years before they decide what to do with us.

We can draw a parallel to when early Europeans began to come to the New World. They didn’t come all at once; they sent a few ships. Then more ships. Then a bunch of ships. It took decades, but eventually things weren’t looking so good for the indigenous people who lived there.

Might we see an unfriendly alien presence escalate once they decide our planet is worth having? It’s an alarming possibility.

What if the aliens aren’t from another planet at all? What if they are us?

Everyone seems pretty convinced that we humans are eventually going to blow ourselves to Kingdom Come, or pollute ourselves to death, or suffer some other global calamity that is probably our own fault. But what if that doesn’t happen? Setting aside that kind of fatalistic thinking, what would we be like if we continued to evolve for another million years or so?

We’re already less reliant on our physical bodies and we are using our minds more than any time in history. If that trend continues, would we evolve to see our bodies shrink and our heads remain large to support our big brains? Would we lose more of our hair, since we really have no practical use for it? Would we begin to look like the grey aliens so many people report seeing?

It’s hard to image the exact forces that would elicit these changes in our species. Who knows what the next million years could bring! But one thing many physicists do believe is that time travel is, at least theoretically, possible.

This may also account for the secretive nature of UFO visitors. Everybody knows if you travel back in time you have to be really careful you don’t meddle with anything or you could screw up your own present time.

Could aliens really be evolved humans, coming back to study what to them is the ancient past?

Aliens are Beings from a Parallel Dimension

Theoretical physicists have great jobs. Come up with a crazy idea you can sort of prove with a little math, write a paper or two, and convince your colleagues to nod their heads when you talk and you’re a genius. One of the best crazy ideas they’ve come up with is the concept of the Multiverse. The Multiverse is made up of countless possible universes or dimensions. These dimensions run parallel with our own, and as a whole they comprise every possibility that could exist.

It’s not necessary to wrap your mind around that right now, but the point is alien visitors may be somehow crossing those dimensions. They would be visitors from another universe, but perhaps not exactly what we’ve always thought. Maybe they are poking their heads into a bunch of different universes besides our own.

The mind reels when trying to imagine the technology it would take to make such a jump. But then again maybe there is some natural phenomenon or rule of physics in their universe that does not pertain to ours. Either way, their secrecy may be a way to keep us from getting hold of these dimension-crossing methods.

It’s easy to understand why they are here: They are learning. A culture capable of crossing from dimension to dimension, or universe to universe, would have incredible knowledge available to them.

Some researchers like to draw a parallel between historical alien visitation and religion. It makes sense to think that the stories supporting modern religions may be explained by ancient man’s inability to understand what aliens were doing. Looking at it this way, God and His angels may well be aliens, misinterpreted by ancient people.

But here’s another thought: What if the beings we call “aliens” are not the good guys?

By many accounts, alien-human interaction involves aliens tormenting people. The little grey guys are reported to sneak into people’s rooms at night, abduct them, conduct painful examinations and wipe their memories of the incident. We tend to believe they are visitors from some other planet, but maybe that’s not true. If these are instead demonic entities, bent on torturing people and convincing them they are crazy, the UFO scam would be a pretty good way to go about it.

Remember the saying: The Devil’s greatest trick is to convince us he doesn’t exist.UFO sightings began to increase as people became more interested in technology over the past sixty years or so. Are demonic beings taking advantage of this and using our interest in technological advancement against us?

Of course there is no evidence that aliens are actually demonic entities. But it stands to reason, if demons really exist, they may use any tactic available to bring sorrow to mankind.

UFOs Come from the Center of the Earth

This might sound crazy, but some people believe the Earth is hollow, and inside there is another world. The entrances to this world are at the poles, and through these openings the inhabitants come out to explore our side of the globe. What people are seeing and calling UFOs are the ships piloted by the inner-earth inhabitants.

This is called Hollow Earth Theory. Back in the 1947, explorer Admiral Richard E. Byrd reportedly flew into the Earth while attempting to fly over the North Pole. Inside, he met a race of people who gave him some advice to pass along to the rest of humanity and then sent him on his way. He recorded all of this is a secret diary which eventually became public knowledge. However, many historians contest the authenticity of this evidence, and claim there are many holes in the story, including the fact that Byrd never attempted a North Pole flight in 1947.

In any event, there are some who theorize that UFOs come from inside of our hollow Earth. They are an advanced race who are caretakers of the planet, and they are watching us closely.

Is the Truth Really Out There?

No doubt if you’ve read this far you’ve considered at least half-a-dozen additional explanations for what UFOs could really be, and some of them are probably quite ordinary and worldly. Of course it’s possible that the UFO phenomenon could all be some kind of cultural lunacy, where people wishfully see and experience things that aren’t real.

Then again, maybe we’ll soon see the day when we turn on the TV and are greeted with images of an alien ambassador standing alongside all of the world’s leaders, shaking hands, making peace and promising a bright future for humans and aliens alike. Nice, but it seems more probable that we’ll all have to keep guessing when it comes to UFOs and aliens.

With any luck, if we really are confronted by an alien presence some day we won’t be staring down the barrel of some interstellar planetary extermination device. When it comes to superior civilizations moving to new places the indigenous population always ends up on the short end of stick.

So, keep your fingers crossed and hope they’re friendly! If you think of any other theories (or if you know) what UFOs and Aliens are and where they come from tell us in the comments below!

Are Aliens Friendly? What will happen if and when an alien civilization makes contact with leaders here on Earth?