Much of the water on Earth and elsewhere in the solar system likely predates the birth of the sun, a new study reports. 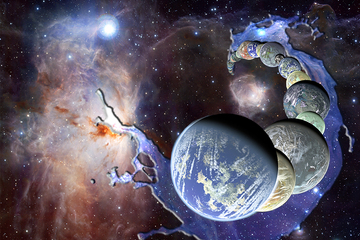 The finding suggests that water is commonly incorporated into newly forming planets throughout the Milky Way galaxy and beyond, researchers said — good news for anyone hoping that Earth isn’t the only world to host life.

“The implications of our study are that interstellar water-ice remarkably survived the incredibly violent process of stellar birth to then be incorporated into planetary bodies,” study lead author Ilse Cleeves, an astronomy Ph.D. student

at the University of Michigan.

“If our sun’s formation was typical, interstellar ices, including water, likely survive and are a common ingredient during the formation of all extrasolar systems,” Cleeves added. “This is particularly exciting given the number of confirmed extrasolar planetary systems to date — that they, too, had access to abundant, life-fostering water during their formation.”

Astronomers have discovered nearly 2,000 exoplanets so far, and many billions likely lurk undetected in the depths of space. On average, every Milky Way star is thought to host at least one planet.

Our solar system abounds with water. Oceans of it slosh about not only on Earth’s surface but also beneath the icy shells of Jupiter’s moon Europa and the Saturn satellite Enceladus. And water ice is found on Earth’s moon, on comets, at the Martian poles and even inside shadowed craters on Mercury, the planet closest to the sun.

Cleeves and her colleagues wanted to know where all this water came from.

“Why is this important? If water in the early solar system was primarily inherited as ice from interstellar space, then it is likely that similar ices, along with the prebiotic organic matter that they contain, are abundant in most or all protoplanetary disks around forming stars,” study co-author Conel Alexander, of the Carnegie Institution for Science in Washington, D.C., said in a statement.

“But if the early solar system’s water was largely the result of local chemical processing during the sun’s birth, then it is possible that the abundance of water varies considerably in forming planetary systems, which would obviously have implications for the potential for the emergence of life elsewhere,” Alexander added. 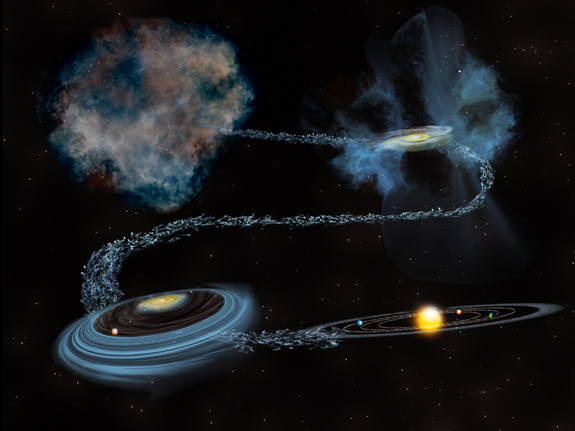 Not all water is “standard” H2O. Some water molecules contain deuterium, a heavy isotope of hydrogen that contains one proton and one neutron in its nucleus. (Isotopes are different versions of an element whose atoms have the same number of protons, but different numbers of neutrons. The most common hydrogen isotope, known as protium, for example, has one proton but no neutrons.)

Because they have different masses, deuterium and protium behave differently during chemical reactions. Some environments

are thus more conducive to the formation of “heavy” water — including super-cold places like interstellar space.

The researchers constructed models that simulated reactions within a protoplanetary disk, in an effort to determine if processes during the early days of the solar system could have generated the concentrations of heavy water observed today in Earth’s oceans, cometary material and meteorite samples.

The team reset deuterium levels to zero at the beginning of the simulations, then watched to see if enough deuterium-enriched ice could be produced within 1 million years — a standard lifetime for planet-forming disks.

While these findings, published online

today (Sept. 25) in the journal Science, will doubtless be of interest to astrobiologists, they also resonated with Cleeves on a personal level, she said.

“A significant fraction of Earth’s water is likely incredibly old, so old that it predates the Earth itself,” Cleeves said. “For me, uncovering these kinds of direct links between our daily experience and the galaxy at large is fascinating and puts a wonderful perspective on our place in the universe.”