Could extraterrestrial life be made of corkscrew-shaped particles of interstellar dust?

Always wondered about alien lives and their origins… well here is an interesting hypothesis!

Could extraterrestrial life be made of corkscrew-shaped particles of interstellar dust? Intriguing new evidence of life-like structures that form from inorganic substances in space are revealed today in the New Journal of Physics.

The findings hint at the possibility that life beyond earth may not necessarily use carbon-based molecules as its building blocks. They also point to a possible new explanation for the origin of life on earth.

Life on earth is organic. It is composed of organic molecules, which are simply the compounds of carbon, excluding carbonates and carbon dioxide. The idea that particles of inorganic dust may take on a life of their own is nothing short of alien, going beyond the silicon-based life forms favoured by some science fiction stories.

Now, an international team has discovered that under the right conditions, particles of inorganic dust can become organised into helical structures. These structures can then interact with each other in ways that are usually associated with organic compounds and life itself. 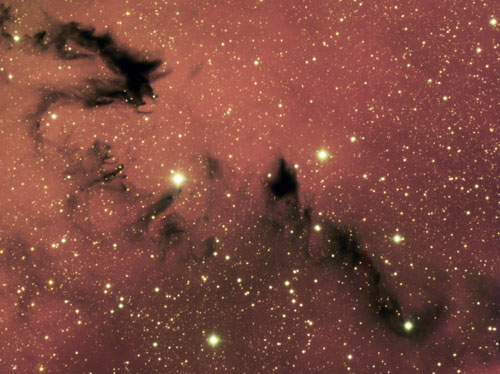 V.N. Tsytovich of the General Physics Institute, Russian Academy of Science, in Moscow, working with colleagues there and at the Max-Planck Institute for Extraterrestrial Physics in Garching, Germany and the University of Sydney, Australia, has studied the behaviour of complex mixtures of inorganic materials in a plasma. Plasma is essentially the fourth state of matter beyond solid, liquid and gas, in which electrons are torn from atoms leaving behind a miasma of charged particles.

Until now, physicists assumed that there could be little organisation in such a cloud of particles. However, Tsytovich and his colleagues demonstrated, using a computer model of molecular dynamics, that particles in a plasma can undergo self-organization as electronic charges become separated and the plasma becomes polarized. This effect results in microscopic strands of solid particles that twist into corkscrew shapes, or helical structures. These helical strands are themselves electronically charged and are attracted to each other.

Quite bizarrely, not only do these helical strands interact in a counterintuitive way in which like can attract like, but they also undergo changes that are normally associated with biological molecules, such as DNA and proteins, say the researchers. They can, for instance, divide, or bifurcate, to form two copies of the original structure. These new structures can also interact to induce changes in their neighbours and they can even evolve into yet more structures as less stable ones break down, leaving behind only the fittest structures in the plasma.

So, could helical clusters formed from interstellar dust be somehow alive? “These complex, self-organized plasma structures exhibit all the necessary properties to qualify them as candidates for inorganic living matter,” says Tsytovich, “they are autonomous, they reproduce and they evolve”.

He adds that the plasma conditions needed to form these helical structures are common in outer space. However, plasmas can also form under more down to earth conditions such as the point of a lightning strike. The researchers hint that perhaps an inorganic form of life emerged on the primordial earth, which then acted as the template for the more familiar organic molecules we know today.