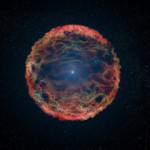 A star-explosion mystery that puzzled astronomers for more than two decades has finally been solved. Researchers using data gathered by NASA’s Hubble Space Telescope have determined that the supernova SN 1993J — which was first observed in 1993, as its name suggests — occurred because one star nabbed hydrogen from another. “This is like a crime scene, and we finally identified the robber,” ... END_OF_DOCUMENT_TOKEN_TO_BE_REPLACED